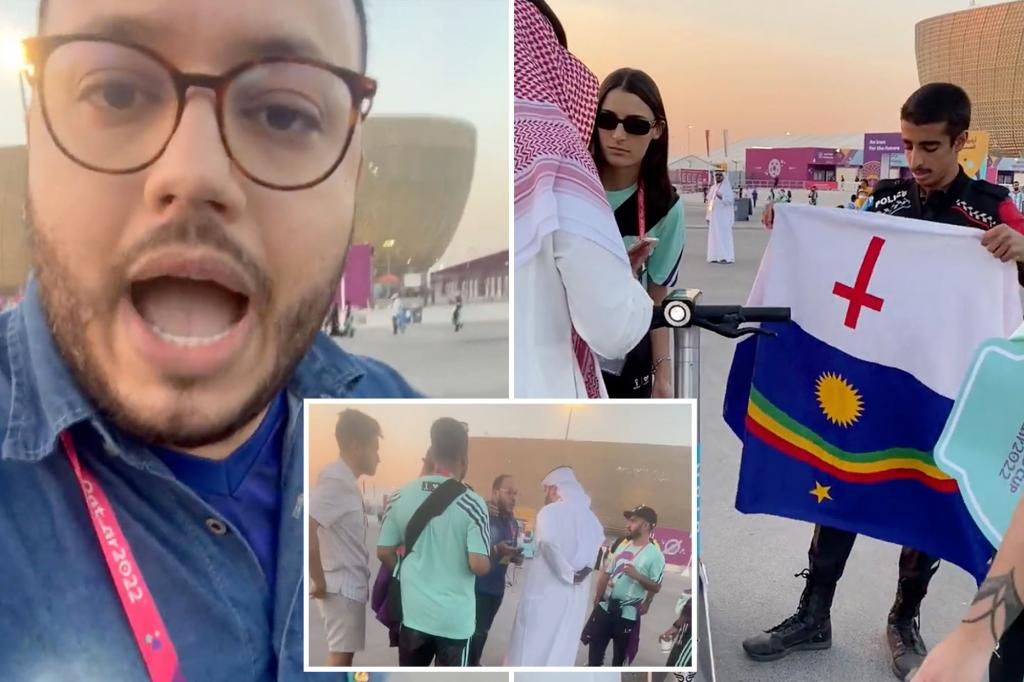 A Brazilian journalist protecting the soccer World Cup in Qatar stated police harassed him exterior the stadium after a regional Brazilian flag was mistaken for an LGBTQ delight flag.

Victor Pereira stated native cops seized his cellphone after he started filming a person’s hostile response to the colourful flag he had with him.

The flag, which incorporates a rainbow, a crimson cross and a star, represents Brazil’s northeastern Pernambuco state.

Pereira stated he was leaving the Lusail Stadium after Saudi Arabia received 2-1 over Argentina when a person sporting a conventional white costume mistook the regional flag for a LGBTQ flag.

Homosexuality is prohibited in Qatar and punishable by jail.

The regional flag offended the person so deeply he ripped it out of Pereira’s hand and tried to destroy it.

Victor Pereira was hassled by police in Qatar over his flag, which featured a rainbow however was not an LGBTQ flag.Twitter / @ovictorpereira

The Pernambuco flag features a rainbow, a crimson cross and a star. Twitter / @ovictorpereira

“This man sporting a white costume grabbed the flag, threw it on the bottom and began stomping on it. I took my cellphone to file a video however he grabbed it from my hand and stated he would solely give it again if I deleted the video,” Pereira stated.

“Then an officer arrived and tried to intervene. He grabbed the cellphone from the opposite man and ordered me to delete the video.”

The Brazilian journalist stated he obeyed to make sure he would get his cellphone again as he makes use of it for work. His story started circulating Tuesday after he shared a video to Twitter describing what had occurred.

A person sporting a conventional white costume had mistaken the flag for a LGBTQ flag.Twitter / @ovictorpereira

Pernambuco’s governor Paulo Camara expressed his solidarity with Pereira on Twitter, sharing a photograph of the flag and writing: “The police noticed precisely what our flag represents: freedom, range and unity. Values that we’re proud to take to the 4 corners of the world.”

On Monday, American journalist Grant Wahl tweeted that he was not allowed into the World Cup stadium because of his shirt having a rainbow flag etched throughout it.

Donning a T-shirt with a soccer ball surrounded by a rainbow flag, Wahl was not permitted to enter the stadium to view the US-Wales match.

Wahl tweeted that he was instructed: “It’s important to change your shirt. It’s not allowed.”

Later that day Wahl tweeted an replace, saying he was “OK, however that was an pointless ordeal.

“Am within the media middle, nonetheless sporting my shirt. Was detained for almost half an hour. Go gays,” Wahl wrote.